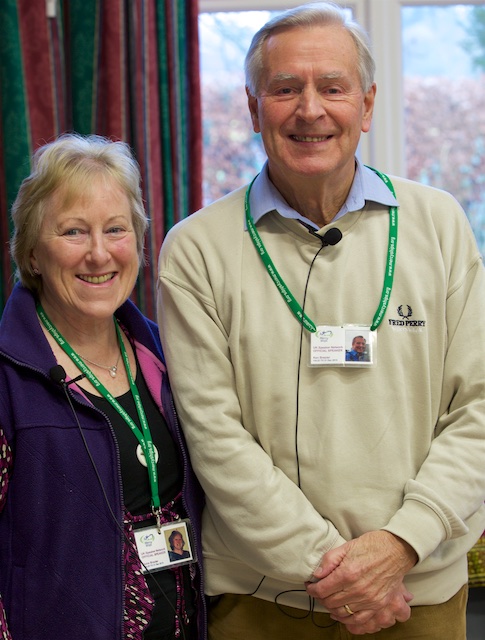 Donations made to Mercy Ships are destined to help with their mission to relieve suffering of those in poor countries where there is a desperate need for medical and dental care.

We know that governments in many African countries are often seen to be corrupt, but any monies given go directly to Mercy Ships.

All donations go directly to the cause and are not used for any other purpose.

The mortality of rate of children born in many countries in Africa is extremely high. One of the projects sponsored by Mercy Ships is to provide a midwifery service to help reduce the death rate of both babies and mothers.

Ken & June Brazier were our guest speakers for this month. Their talk was about the charity Mercy Ships. 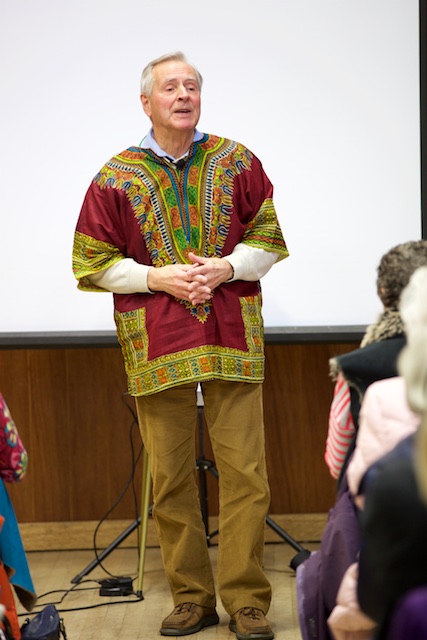 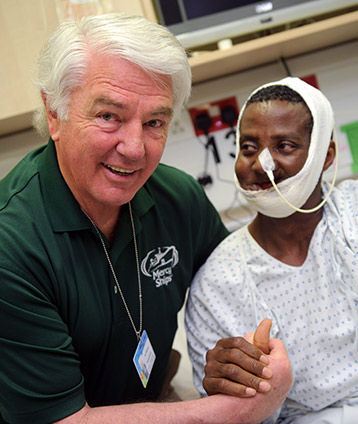 Don Stephens pictured with one of the patients they have treated.

This videos will give you some idea of the valuable and humane work that the volunteers of Mercy Ships actually do.

(Note: we've borrowed this video from vimeo, so be aware you may have an advert pop up at some point. Just click on the little x in the corner of the ad to make it go away!)

June Brazier holding one of the children Mercy Ships has helped. 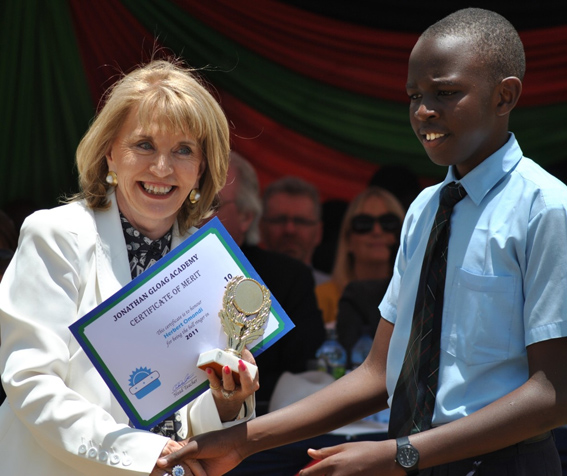 A few photographs of our members both before and during Ken and June's presentation.

Further down the page we've added photographs in a Gallery. Some of the pictures were referred to by Ken and June in their talk.

If you click on one of them you can enlarge and see them more clearly.

The links open up in a separate tab or window and give more information about the mission.

The Work of Mercy Ships…

Mercy Ships was founded in 1978 by Don and Deyon Stephens. It has outfitted and operated a total of four hospital ships to serve developing nations since 1978. Originally, it was a part of the YWAM (Youth with a Mission) family of Christian ministries, before becoming a standalone organization in 2003. The organization uses retired ocean liners and ferries that have been transformed into floating hospitals.

The first ocean liner acquired was the Victoria, which was purchased for its scrap value of US$1 million. The nine-deck vessel was transformed into the hospital ship MV Anastasis over a four-year period. The 522-foot ship was equipped with three operating rooms, a dental clinic, an x-ray machine, a laboratory and 40 patient beds. The ship's 350-member crew included Mercy Ships founders Don and Deyon Stephens, who lived on board the ship with their four young children for ten years.

In 1983, the Anastasis (the Greek word for "resurrection") began operations in the South Pacific, then moved to Central America and the Caribbean Sea in the mid-80’s. The ship moved on to Africa in 1991 and remained in service there until 2007. The final port of call for the Anastasis was Monrovia, Liberia.

Mercy Ships purchased the Norwegian coastal ferry Polarlys in 1994 and transformed it into the MV Caribbean Mercy, a hospital ship serving Central American and Caribbean ports. The ship offered berths for 150 crew and was equipped initially for field medical clinics. Over the course of several years, the ship was equipped with modern eye-surgery capabilities. The first eye surgery was performed on board The Caribbean Mercy in early 1997, while the ship was docked in Guatemala. On land, volunteers from the Caribbean Mercy also provided dental, orthopedic and healthcare services. The Caribbean Mercy visited 138 ports of call and remained in service until May 2005.

In 1983, the Canadian ferry Petite Forte was donated to Mercy Ships to provide relief operations in the Caribbean. Initially christened the Good Samaritan, the ship was re-christened the MV Island Mercy in 1994. The 60-berth vessel remained in service until spring of 2001. The countries it served included Brazil, the Dominican Republic, Guyana and Haiti. The ship also reached beyond the Caribbean with relief and medical operations in Guinea-Bissau, Western Samoa, the Tokelau Islands and New Zealand.

Since 2000 Mercy Ships has the 16,500-ton flagship Africa Mercy, which measures almost 500 feet long. The Africa Mercy has greater capacity than all three previous Mercy Ships combined. A second, purpose-built hospital ship is currently in design. In May 2007, the Africa Mercy sailed into the port in Monrovia to meet up with the Anastasis, enabling crew, equipment and supplies to be transferred from the oldest Mercy Ship to the newest one.

The Africa Mercy, the only current Mercy Ship, in 2007 made its official maiden voyage to Monrovia, Liberia, from the shipyard in England. In 2008, the Africa Mercy continued its service to Liberia—offering free surgeries, assistance in healthcare infrastructure development, and community-based preventive health care programs that benefited thousands of individuals and many communities. More than 1,200 surgical procedures and 10,000 dental procedures were completed, along with community health projects such as HIV/AIDS prevention and construction of wells and latrines.

Early in 2010, the ship was docked in Lomé, Togo for the 2010 field service. In August 2010, the Africa Mercy went into shipyard in South Africa, where it was equipped with new, more efficient generators. In 2009, the ship was docked in Cotonou, Benin from February to December, providing free surgeries and medical care. Mercy Ships also worked with Beninese citizens on agriculture and water development projects on the ground in Benin. Before the Africa Mercy arrives in port, flyers are distributed to alert the public to the ship's upcoming visit. An advance team begins a massive screening of thousands of prospective patients, to see which men, women and children qualify for a surgery. It is common for people to walk for days (and even from neighboring countries) to find out whether they may be eligible for surgical treatment.

Africa Mercy spent the 2016 summer months completing dry dock and annual maintenance in Durban, South Africa. The ship sailed in August for the port of Cotonou, Benin, where its field service will last from August 2016 to the summer of 2017. The ship was previously docked in Toamasina, Madagascar from October, 2014 through June, 2016, for two field services. Before that, the ship served in Pointe Noire, Republic of Congo from August 2013 till May 2014. Before The Republic of Congo the vessel was docked in Conakry, Guinea and Lomé, Togo. The Africa Mercy docked in Freetown, Sierra Leone for its 2011 field service, which lasted for 10 months.

At the conclusion of each field service, the Africa Mercy goes into dry dock, where it is resupplied and receives any needed repairs or upgrades before heading to its next port of call.

Clicking on the photos will enlarge them. You can navigate using the arrows either side of the pictures, in any direction. 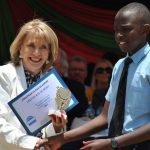 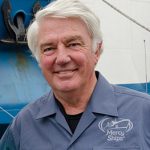 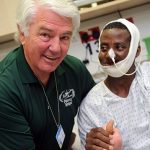 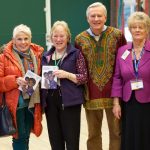 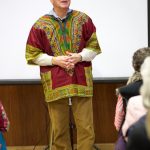 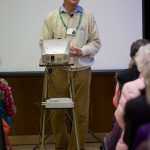 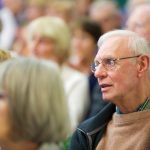 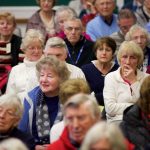 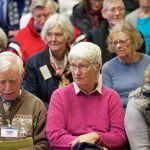 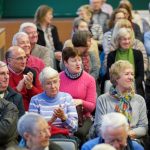 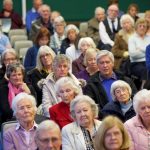 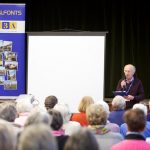 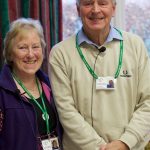